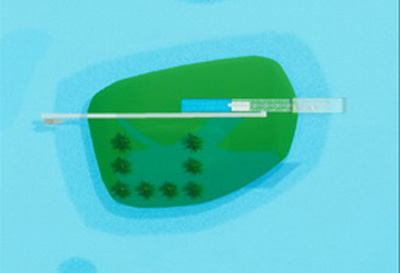 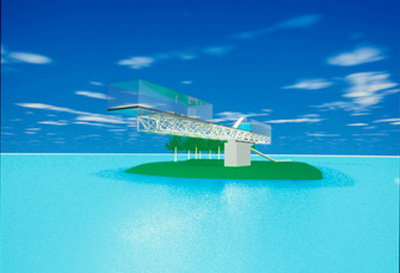 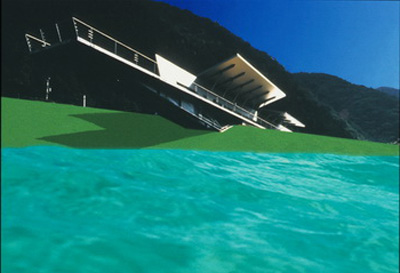 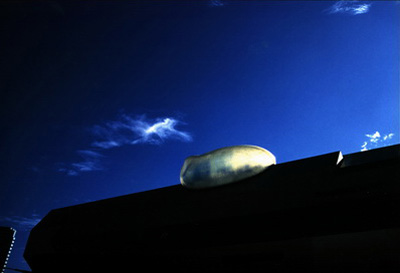 The guest pavilion sits on a tiny island in a vast lake. The islet, just 70 meters long, is no more than 750 meters from the shore, so electricity and drinking water are supplied from land. But there is no bridge; access is only by boat.

This work is preceded by two other waterfront "Jelly Fish" plans, a seaside vacation home done in 1990 and "Jelly Fish-2" for a museum facing the sea, in 1994.

One of the greatest charms of water is its buoyancy. In a way, water gives things wings. To experience what it is like to defy gravity one need not go into orbit in outer space but simply know the feel of being
buoyed up by a body of water.

On land, we can move only forward and backward, right and left. In water, we can also move upward and downward, in whatever direction we desire. A totally new world unfolds there, the marvel of which we can understand through experience. Real appreciation of a space that allows free movements requires experience. Knowing is one thing and understanding is another. Only in water can we truly grasp the three-dimensionality of space.

Another of the charms of water is the way it changes constantly in the light. The water around a coral reef is jade green, but if you scoop it up in your hands it is transparent. When a squall approaches, whipping up white-caps along the surface of the sea, the water turns into an opaque,
silver-white sheet.

The character of water changes instantaneously according to the action of wind and light. Through that action, water can serve as a filter that can in turn alter the wavelength as well as the reflectivity and
transmissivity of light.

The Jelly Fish series is a prototype for experimenting with light and water. One of its aims is the attempt to give material substance to the invisible power of buoyancy. Another is to transform actual space into a
control filter vis-?-vis the external world. The ultimate goal of these two attempts is to exchange substance for space and space for substance. People have the preconceived idea that space is empty and substance is dense. The Jelly Fish series presents space that is full of liquid, space that has substance that we can touch. It also exhibits space as a film that changes light and wind.

The shape of a "jelly fish" resembles a balance, a scales for measuring the weight of space and the mass of light. On this balance, force becomes material, and the material becomes action-interchangeable symmetry.

The first Jelly Fish led to "Mura-no-Terrace 95" ,a completed work facing a mountain stream. Part of "Jelly Fish-2" was realized as a semi-transparent, free-curved surface volume, "K-Museum 96" ,located on reclaimed land along the sea. I hope that this third time "Jelly Fish-3" will be built according to plan.