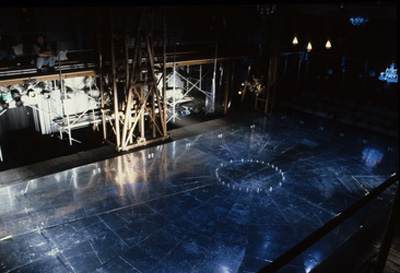 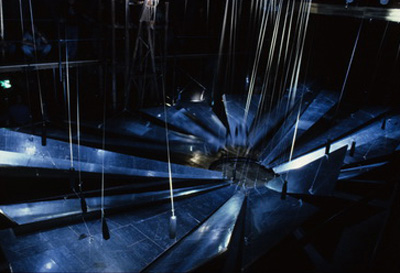 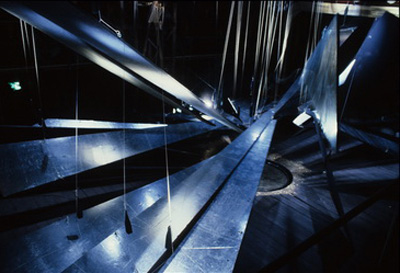 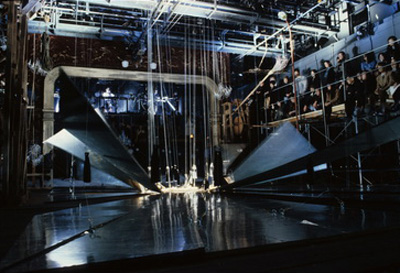 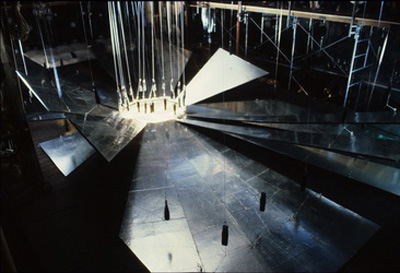 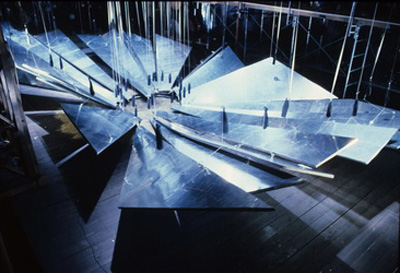 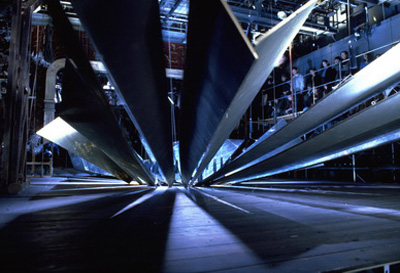 Presented a few years ago in Tokyo’s Spiral Hall, it demonstrates “drama” in an entirely new sense of the team. Few actors appear and there is no story; it is the objects and spaces that appear that are the main “actors.” The photos show the scene that I created, but what you see are not simply stage properties; it is the space itself that makes the drama.
This “drama” is the collaborative work of three persons: an architect (myself), an artist, and a stage properties designer. Each of us created one scene, which was incorporated into a whole, gradually unfolding composition. The enclosed photographs show only the scene which I myself was responsible for.

The idea behind this work is not to present actors or properties to be seen by the audience, but dramatic space to be experienced as a whole.
My work on the project, therefore, was not only to design the space, but to direct the proceedings, the lighting and the sound, and to plan everything to do with the scene and the way the “drama” unfolds: a silver metallic floor appears; it breaks up, with all its fragments flying into the air, scattering and floating within the theater. Some of them drop to the ground and break. The audience experiences this succession of events with great immediacy.

Architecture possesses space, but it cannot control time.
Drama can control time, but the audience and the stage are separated so that the viewer ends up simply observing the events that unfold on the stage, so their grasp of the space remains superficial.

This work is an attempt to merge space/architecture and theater/time; it attempts to make the spatiality of architecture unfold on the fulcrum of theatrical time.
It is an example of what one might call “chronotecture.”

Chronotecture is akin to installation and performance in the world of art, but is distinguished by its presentation at a given time and in that it causes the audience to be held during that time within a specific time and space and also by virtue of its strong structural orientation.