Formless Architecture and the Meaning of Visibility

Unique and Not Found Elsewhere 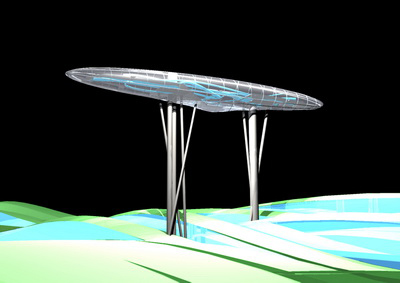 What is necessary for the Diet architecture ?
If we seek not the dispersion that characterizes the vastness of the Net but convergence at a single point, the raison d'etre of the Diet architecture is the specification of its unique existence-as the only place where national lawmakers gather and deliberate.
The Diet should be a physical entity whose existence anyone can confirm with an actual visit.
Confirming is the same thing as seeing. Human beings are of a visually-oriented species.
Visual-related activity occupies as much as sixty percent of the human cerebral cortex.
Seeing is knowing. Then, what do you see in the Diet ?

You Can See It, But Not Really 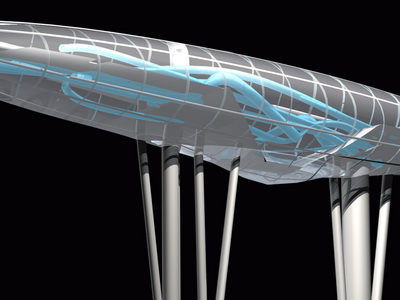 I have endowed the Diet architecture with a paradoxical concept: "The one and only, but not just one.
" The architecture is the only one of its kind, but it is also not specific. It is a architecture you can see but not really. It does not have a specific shape. Its framework is made up of flexible joints. By fixing or releasing the joints and selecting the strength of each member,the shape of the structure can be changed.

The exterior of the architecture is made of elastic covering, and minute actuators densely arranged on its inside maintain and adjust the form of the architecture. Consisting of small, linked cells, the covering resembles the skin of a living organism.
Photosynthesizing organs and chromatophores are built into the cells, and the cells are activated by sunlight.
The covering is made of crystalline liquid, and its penetrability can continuously be changed over the wide range of electromagnetic waves,including light and infrared ray.

This effect can be used conversely so that the covering also functions as a screen on which an enlarged picture of the inside is projected.
The cells have a self-cleaning mechanism made possible through photocatalyization, and so are maintenance-free. Study is also being made of the possibility of incorporating self-restorative capacity.

Two Factors That Determine the Shape 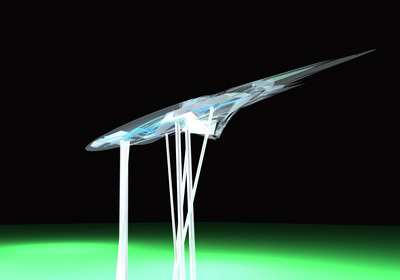 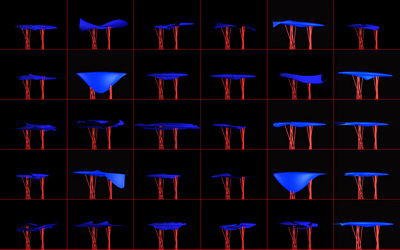 The overall shape of the architecture is determined by two factors. One is internal. The condition of activities inside is reflected in the form.
For example, it swells when the Diet is in session, and becomes flat when the Diet is in recess. And vice versa. When there are many visitors, the shape swells again.
When a session becomes clamorous or even violent, the inner space expands to its very limits, and the covering of the architecture turns into a transparent screen projecting the scene of the struggle.

Diet members have a right to privacy. If they want to meet secretly, they can make part of the floor and wall immediately around them temporarily translucent.
As long as it is known they are meeting in secret, the content of what is discussed should remain secret.

The other factor that determines the shape is external forces. On a windy day, the architecture has a sleek form, keeping the coefficient of drag low.
When an earthquake occurs, the structural joints serve as an active tremor-absorbing system.
The framework and skin of the architecture change in order to minimize resistance against not only wind and tremors but other external forces.
The changeable, resilient form should also work well when the Diet has to withstand the storms of public criticism.
Natural artworks such as sunset glow and lightning are recorded directly by light receptors of the skin, and are played back inside and outside the skin. A fitting background for a heated debate may be a quiet scene of sunrise.

If the actuators of the skin are on vibration mode, the outline of the architecture is not set; it appears like a blurry image. Even if you blink your eyes, it is hard to see it clearly.
I do not take the position that any form is acceptable in architecture that is a package after all.

The Diet architecture I conceive has a form that is some reflection of dynamics. It is something like living beings that assume various forms. In an environment where various forces combine, the forms of living beings are determined in response to a given combination.
It is up to living beings what form they will take.
(Actually,it is up to their DNA rather than their will.)

Gazes Within and the Enclosed Realm 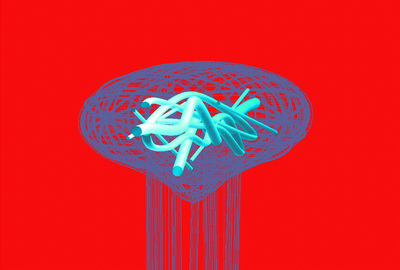 Since the entire architecture physically changes and trembles, it is held aloft for safety. It cannot be touched from outside. It is not only untouchable but blurred once in a while, and cannot be seen clearly.
A question arises as to whether the Diet architecture really exists. You can see what is going on inside it on television, but what you see can be created using a studio. In order to confirm the existence of the Diet architecture, you yourself must go and observe inside.

The architecture incorporates space set aside for visitors. The space is a network of tubes running throughout the body. They take visitors everywhere. They run through the floor of both Houses, through the committee rooms, and into the secretary's offices.
But, the outside and inside of the tubes are completely separated, though mutually visible. They never merge.
The space for the lawmakers and that for visitors are in the same architecture but belong to different realms.
Even if a terrorist, mingling among visitors, should detonate a bomb, the tube will not break, causing no hindrance to the Diet deliberations.

The two spaces are in such a relationship that they see each other but never meet or interfere.
In exchange for giving up close physical relations between them, observing is unrestricted.
Visitor can see what is going in any room, almost anywhere.
Just like so many blood vessels inside the body, the tubes circulate everywhere inside the Diet architecture.
This is architecture to be looked at from inside.
Its form exists not outside but inside.

Are you certain, incidentally, that deliberations are really being held within that triangle-roofed Diet architecture in Tokyo, the present capital of the nation ?