CHALLENGE FOR THE ORGANIC IN URBAN SPACE 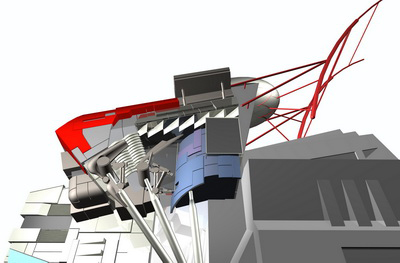 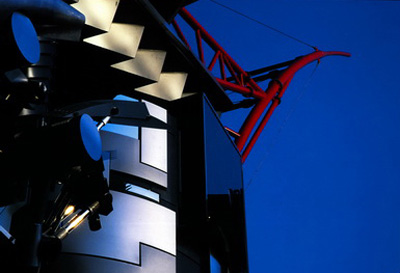 The site lies in Shibuya, which is one of the main sub-centers of the downtown area of metropolitan Tokyo.
It is a sprawling, unorganized district filled with a hodge-podge of office buildings and shops, condominium high-rises, and apartments, typical of its kind in Japanese cities. Even Japan, as well known from the example of Kyoto, has its neatly organized cities that have developed through the centuries. But what semblance of order had been carefully fostered during the Edo period (1603-1867) for Tokyo was destroyed by the bombing of Tokyo toward the end of World War II, and in the ensuing rush of rapid economic growth, comprehensive, well-thought-out city planning was ultimately never carried out, leading to the disorderly urban sprawl we observe today .

But for all the apparent disorder and disorganization, it is a city unlike any other in the world: its crime rate is low, traffic accidents are relatively few, its economy is extremely efficient, advanced technology continues to shape and reshape the city, the arts and culture, especially recently, have begun to thrive there, and people of all kinds gather there from all over the country, all in all making it one of the most dynamic and exciting cities in the world today.
Yet in fact, the impression of confusion in the city is undeniable. 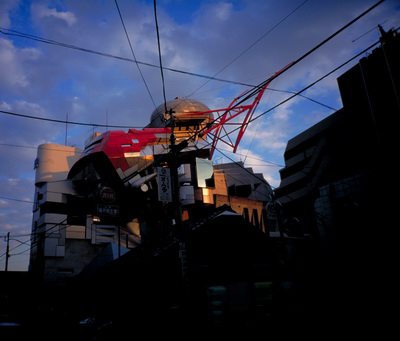 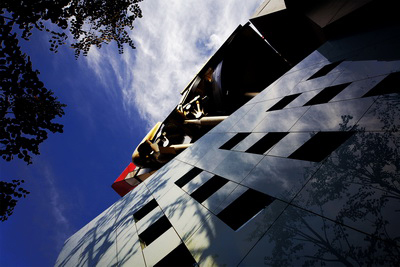 What does the building of a single piece of architecture mean in a city like Tokyo? What can it do for the city ?
Just one building cannot accomplish much in carrying out a grand urban plan. And yet, it must not be closed to itself and cut off from its surroundings either; otherwise the city would become nothing but a cluster of disconnected, unrelated buildings. Architecture ought to represent the effort to find a way for even one structure to have some effect on the city.

Tokyo is built on different principles from those that govern Western cities. There are no clear boundaries dividing the city from its environs, and few broad, long avenues that afford grand vistas. Zoning regulations are ambiguous, so buildings of all kinds mix and mingle.
One-story dwellings cluster at the feet of skyscrapers. Behind the large commercial firms clustered in major city centers, are labyrinths of alleys filled with factories, drinkeries, dwellings, and shops.
But this city still manages to function smoothly. Why ? 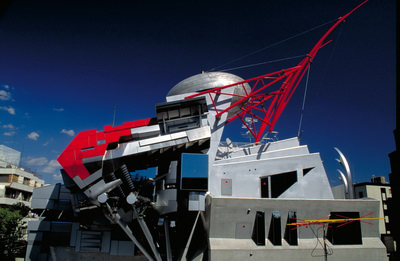 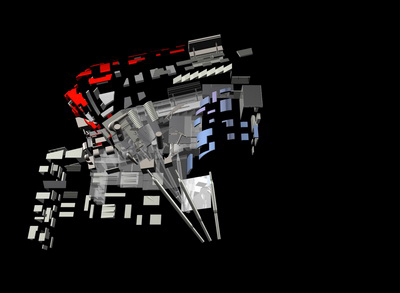 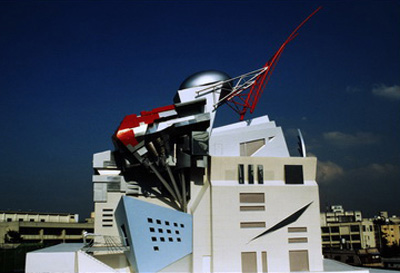 There is no common standard in Tokyo that defines what a new building should be. There is not so much as a single concept of how individual buildings should be built in order to create the ideal city nor any strict legal regulations to achieve such a goal.

Instead, each building somehow responds to its neighbors and the overall urban milieu, working out a principle of design on its own.
On the surface, these separately conceived buildings look disconnected, but in fact they form real relationships with one another.
The whole takes shape spontaneously, without overall controls or coercive regulations.
The whole creates its own integrated system, through the self-organizing relations that form among its parts.

This urban order is one that comes about of itself; it is not forced by means of strict regulations imposed from above.
It is an order not visibly planned or organized, not based on any one single principle, but dynamic and flexible enough to absorb all manner of changes and still continue functioning.

Tokyo is built according to mechanisms that permit maximum liberty to individual parts and promote their integration into the whole , rather than subjugating them to the whole. They operate on a principle that seeks a free and well-balanced order that does not stifle individuality or undermine the whole.

This organic principle of urban growth is not unique to Japan and Asia. In Western Europe, too, it is thought that cities built on a similar principle existed prior to the Renaissance, although they vanished with the advent of the modern age. It is possible that this principle offers the answers to many of the various problems that plague cities today, not only in Japan but all over the world.

Toward a New Formative Principle of Order The self-organizing, organic system that emerges on this principle, however, is-like a natural phenomenon-not conscious.
As long as it remains an unconscious principle, it is difficult to draw upon in creating, for example, some building.

By extracting from the spontaneous workings of this principle those methods that we can consciously apply, it is possible that we might develop a conscious principle upon which to create a new architecture for the city.
The Aoyama Technical College aims to discover such a principle for establishing a new order

Message for the City 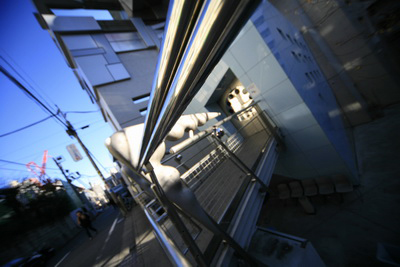 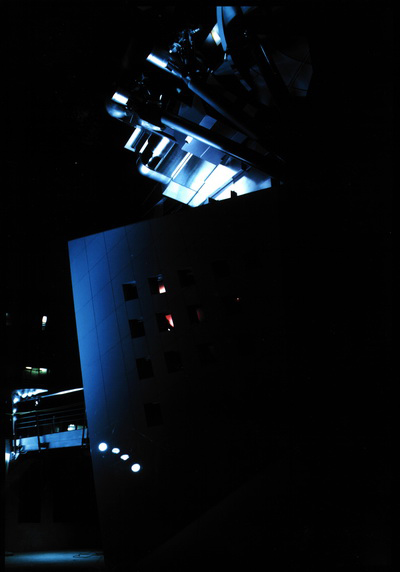 This building consists of many parts.
They all are essential architectural elements-posts, water tanks, lightning rod, joints of various kinds.
But these parts, even after fulfilling their required functions, maintain the momentum of their growth, rising up like so many young shoots flourishing upon a sufficient supply of water and light.

But if they all continued to grow arbitrarily, friction would arise among them, causing the collapse of the whole.
Spontaneously, the growing parts begin adjusting their relationships, considering one another and altering themselves accordingly.
This works to create a harmonious whole through self-organization, in the same way the body of a living thing is made of many different, independently functioning types of tissue.

Here we see an approach in which diverse parts, while pursuing their own vigorous fulfillment, achieve an integrity of the whole without being forced to do so from above. Individual autonomy is respected, a theme that befits a building that houses a college.
It represents a new order, not achieved through simplistic control from above but through tolerance of chaos.
This interaction among parts can be expressed using the Japanese word" ma" (the space or distance among parts).
It offers the possibility for transcending the dichotomous principle of modernism that divides everything into two categories, and refuses to accept anything in between.

The Power of Architecture Restored 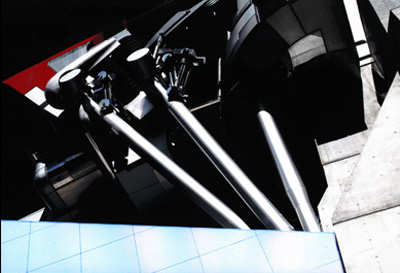 The Aoyama Technical College building is also intended to restore the fundamental strength that buildings ought to have.
Ancient structures, from the Pyramids to the great cathedrals, possessed the awesome power of large spaces.
Most of modern architecture, it seems to me, has lost this basic power. Architecture ought to be something capable of moving people's hearts and giving them a physical thrill in a way possible in no other art.
That power deserves to be restored.
Another purpose of this building is to assure that anyone who might see it experiences, both mentally and physically, an definitive feeling of excitement.

Toward Cities Beyond the Modern Age 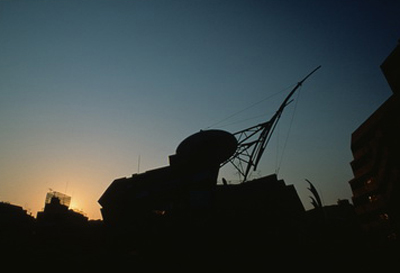 The completion of this building proved a potent stimulus to the disorderly, chaotic area in which it stands.
The effect of this structure proposing a new principle for creating architecture in the city will spread, helping people to stop and think about the way they want their cities to be.
They can thus change their communities, as well as Tokyo as a whole, into better worlds.
It is not my aim either to transplant to Japan the classic Western patterns of building cities or to put up with the chaos of Tokyo at it is, but to grope for the way we want the new city to be.