SUNGOD CITY is one of the series of INDUCTION DESIGN projects that began in the 1990s. It is a part of ALGODesign(ALGORITHMIC design). neo SUNGOD CITY is a new version of SUNGOD CITY (intended for public release). There are versions in two different programming languages. Setting items and the interface have been updated.

SUNGOD CITY is a program in which units form clusters according to the primary constraint of sunlight. No unit can exist unless it receives sunlight for at least the specified length of time. The architectspecifies the size of the site, the allowable height (:corresponding to a number of stories), and the total number of units. Other conditions can also be selected, for example, whether or not generated units must adjoin existing units (:restraint condition).

While satisfying these conditions, units join the cluster one after the other. The requirement here is that "all units must meet the specified sunlight time condition within the specified site and allowable height". For some specifications, this may impossible. In that case, as many units as possible are generated. The best (probably) answer within the range of possibilities is derived.

In MOON GODDESS CITY, the condition is the opposite of SUNGOD CITY. The condition here is that, as far as possible, units should not be exposed to sunlight (in other words, should not be heated). While exposure to sunlight is kept to the specified value or lower for all units, the specified number of units generate a cluster. In this way, a form with a high degree of freedom is born while reducing the energy load.

In both programs, the rule is simple: sunlight. From this simple rule, complex and variegated cluster forms develop. Each iteration generates a different shape. There are no repetitions. At first glance, all of these forms appear to be random (as if the units had been arranged on impulse, with no particular purpose). But in fact each form strictly satisfies the specified conditions.

It appears to be free play, but in fact it is real work. As results, forms like these become what is called design. Here, "design" does not mean something created willfully. It means something born from willfully specified conditions. 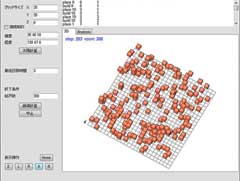 Despite a common misconception, the purpose here is not to create a complex form. The purpose to is bring forth form that permits multiplicity. The form becomes complex because it has acquired multiplicity. Systems that contain such states are called "complex systems". (Which itself is rather complex.)

Free forms that do not give the impression of having been subject to constraints and restrictions, of being a certain shape because that is the only way to achieve such and such. Of course, there are rules at work below the surface of the apparent freedom. But unlike most rules (as encountered, for example, in design), they do not restrict our actions directly. They never tell us that we cannot do something. Therefore, we do not feel that they are rules. Instead of telling us to operate in this way or that way on results, the INDUCTION DESIGN method derives results indirectly (in the same way that a current is induced by changing the distance between a coil and magnet).

By doing this, "generate diverse forms that satisfy the required conditions, with a simple method." That is the function of INDUCTION DESIGN.

Don't you think that is rather strange ?